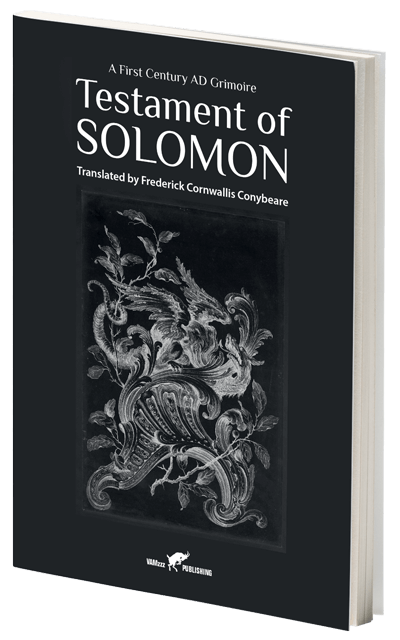 The magic of King Solomon

The Testament of Solomon could be the oldest of all classical grimoires. The work is one of the so called Pseudepigrapha and should therefore be dated somewhere before the middle of the first century AD, according to the latest research. The book was written in Greek, but most likely the Greek version is a translation of an older version in Hebrew.

Testament of Solomon sums up a list of demonic decan rulers of the Zodiac and provides the method or the invoked angel they can be countered by. This relation between decans and demons or their angelic counterforce is emphasized. Interesting is the relation between the decans and physical complaints. Especially if we compare this text with those of contemporary medical astrology. See Reinhold Ebertin, Enzo Venosta or H.L. Cornell.

The document was translated and first published by F.C. Conybeare in the Jewish Quaterly Review of October 1889. Possibly it is the first text that mentions the use of the pentagram (pentalpha) for protection against the evil forces.

Frederick Cornwallis Conybeare (14 September 1856 – 9 January 1924) was a British orientalist, Fellow of University College, Oxford, and Professor of Theology at the University of Oxford. He was the third son of a barrister, John Charles Conybeare, and grandson of the geologist William Daniel Conybeare.

Conybeare pioneered Armenian scholarship in England. He was educated at Tonbridge School and University College, Oxford, where he obtained a double first in classical languages, philosophy and ancient history. He was then elected a fellow of the college; but, benefitting from a private income, and finding the round of college business somewhat unchallenging, he resigned, and on the advice of the great orientalist D.S. Margoliouth, devoted himself to the Armenian language. Later he took up Georgian too.

Conybeare was far from being a dry scholar. He expressed his opinions on matters touching beyond the sphere of scholarship with a passion unusual in a linguistic specialist of his time. His first venture into controversy was to give a strong support to Alfred Dreyfus against the anti-Semitic French establishment. This resulted in his book The Dreyfus Case in 1889.

Read more about Conybeare in the Post Scriptum of Solomon.

‘Conybeare's study of Christian origins made him a religious sceptic.’

A grimoire is a book of magic, typically including instructions on how to summon or invoke supernatural entities such as angels, spirits and demons; how to create magical objects like, rings, talismans and amulets; or how to perform magic spells; charms and divinations.